Hangin' at the Laemmle!

The first time I sold a painting to an unknown patron was waaaayyy back in 1988. I was living near Venice beach at the time and somehow I discovered that the Laemmle Theater in Santa Monica needed art for their lobby.  I was still learning the craft of painting and figuring out the pricing of my work, framing it, and of course hanging it.  So I really couldn't believe it when they said yes. After all, this would be the first impression of their guests as they arrived to see a movie!  It was a cool and classy place where they showed arthouse and foreign movies. In fact, that's probably how I found out they supported local artists like me.  I loved seeing movies there myself.

Actually, I can't even believe that I had the guts to ask if I could exhibit my art in the first place. But, I've always been somewhat naive about reality vs. ideality.  I have no filter when it comes to being inquisitive. Ideas pop into my head and before I have time to talk myself out of following through I act on them. So I guess that would make me impulsive as well.  As another example:  A few years after exhibiting at the Laemmle, around 1990, I walked into Oliver Stone's production office in Santa Monica and asked to speak to the Art Director about working on his next movie, 'The Doors'.  Can you believe, within a week I was hired to do all of the sketches in that movie attributed to Jim Morrison who enjoyed doodling and writing poetry in his notebooks.  I sketched over 100 images of which they used two close-ups in the movie. I also painted signs & created some period cereal boxes for the set decorating dept.

But, I totally digress!  Back to the Laemmle...

I would ride my bike to the theater to see if anyone purchased my art. Honestly though, I didn't think anyone would. Much of my art was spooky, weird... and amateurish. As I stated earlier I was just starting out.

But, then 'it' happened!

The first time I sold a painting I was more confused than happy. There was an empty space on the wall so I approached the manager and asked if they had taken down one of my paintings (maybe it was offensive or it spooked somebody).  But, that's when he handed me a check. Someone had actually bought one and taken it with them!  And a week or so later it happened again!

Soon my weekly ritual was to ride my bike down to the theater to look for empty spaces on the wall. And nearly every time I visited the theater there would be a check waiting for me! It was CRAZY! And, I must admit, it's a feeling that has never gone away. Each time I sell a painting (and I've sold over 200 by now) it's like the first sale!  In fact, I think I appreciate it even more now.

I found out recently that a Laemmle Theater is in the works in Santa Clarita (near our home).  For obvious reasons I have a positive association with this theater chain!

The Laemmle Theater in Santa Monica helped to give me the confidence to keep going with my art! They allowed me to exhibit there for nearly four months! And while there I sold about twenty paintings all together!  How I wish I had kept the names and contact information of those who purchased my art.  I would've loved to have thanked them.

Each and every one of us has something unique to create - to give - to sell - or to express.  I hope that if you're reading this, it inspires you to stay naive - inquisitive and impulsive too! Move quickly before your shadow can catch up with you and cast a dark cloud on your dreams!

Posted by Janine Cooper Ayres at 10:57 AM No comments:

For seven years now I've been invited back during the month of February to exhibit my art at the La Canada Flintridge Library.  It's always an honor! Thank you Mary, Mark and Kathy for this privilege.

Can you just imagine how many artists there are in the Los Angeles area alone who would be thrilled to have a large community room to themselves for a whole month -- to express, and communicate their ideas like this?

But these past twelve months have not been like any others I've experienced before on this planet!  I saw and heard things in the political arena that I could not believe nor ignore.  In fact, they affected me and my art in a pretty drastic way!

Still, I fought the urge to make a political statement with this exhibit. After all, I would be exhibiting in a County building!  So, how could I express myself freely as a female artist and be politically correct at the same time?  This was my challenge.

And then finally, it came to me.  I could exhibit peaceful and calming images and search through my archives to feature many paintings I've created in the past that express feelings of love, peace and togetherness.  After all, these are the beliefs and truths that are universal.  Whether you are on the right, the left or somewhere in the middle politically,  there are certain fundamental unifying beliefs. One of the most important is that we all want to live on a peaceful planet.

Yay! I was inspired! A flurry of paintings began to come through, just three weeks prior to the exhibit's opening. (My right shoulder is still locked up!)

Below are a few of my new paintings that are currently on exhibit at the library. 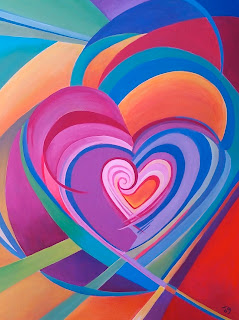 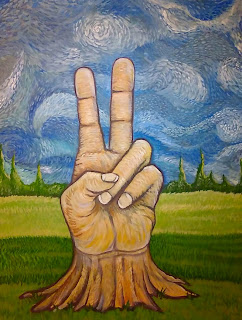 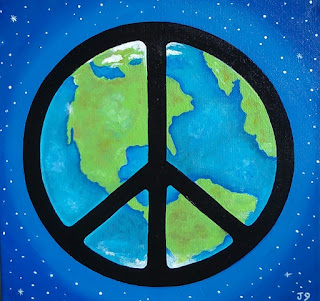 In this new era of the internet I no longer have to urge you to get in your car and battle traffic to come down to see my exhibit. I can bring it to you. If you have one minute and 39 seconds here it is.

All of the pieces (except for 'Opening Hearts') are for sale.  If you'd like to see the price list, here it is. 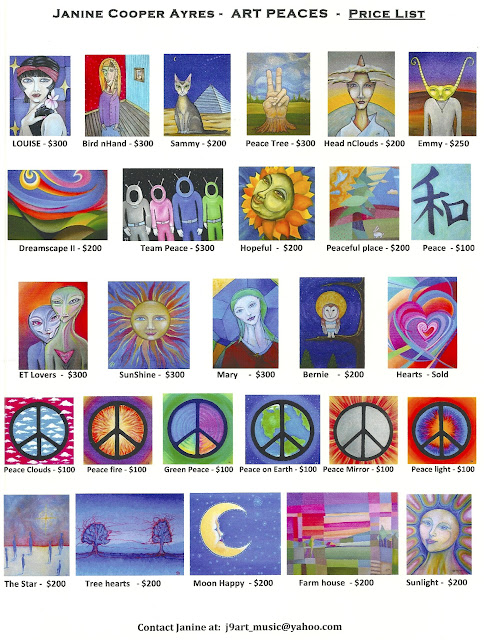 Thank you for taking the time to drop by.  And, if by chance the current political situation is making you a bit anxious too, PLEASE - please find a creative outlet like music, art or writing. Or maybe it's exercise or a ritual like a daily soak in a hot tub.  Please take care of yourself and those around you.

Wishing you peace, love and light from this day forward.


Posted by Janine Cooper Ayres at 10:05 AM No comments:

The Art of Collaborating

When I think about all of the paintings that I've created while collaborating with a client or friend (and many clients become friends), I am blown away by the number - over one hundred paintings by now, I'll bet!

It's one thing to create a painting in a quiet space without the input or critique of anyone else -- it's liberating and at first it's all that I wanted to do. But, something very special and magical happens when you co-create art with another person.

As I grow older I realize that it's these paintings -- the ones that would have never been born had I not been hired or asked to paint them -- that are the most special!

Below are just a few examples of those paintings.  The first one is a portrait of the Russian Medium Helena Blavatsky (which I painted for my husband's book, Quotable Blavatsky). 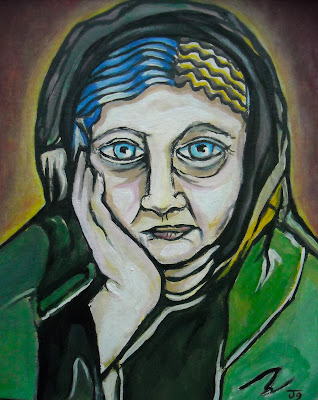 The portrait below is called 'Johnny goes to Cairo'.
It was commissioned by the Director of the Acton/A.D. Library 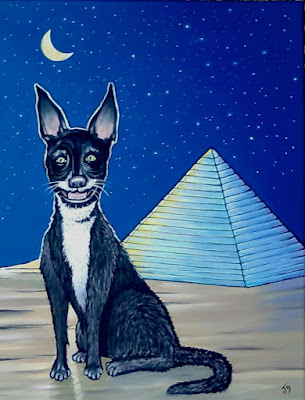 The peace sign below was commissioned by my friend and ex co-worker, Joe.  He had a vision for each section within the peace sign symbolizing something meaningful for him and his family. 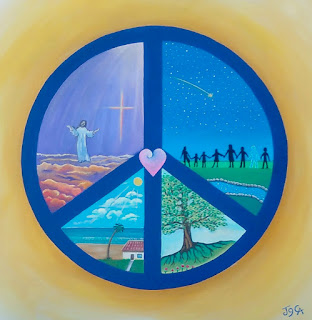 Below is 'Penny'.  I was commissioned to paint this very special
kitty by my friend and co-bandmate, Lonnie. 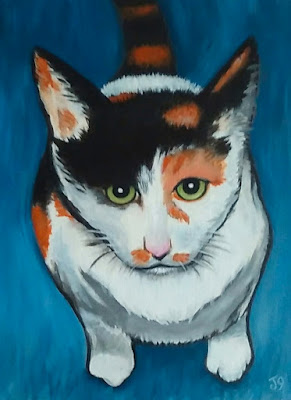 If ever you have an idea that you would like to bring through, but painting is not your thing, I highly recommend finding a local artist to work with. Chances are, a magical collaboration will occur!

You can see more of my art at:


Posted by Janine Cooper Ayres at 12:29 PM No comments:

ANIMALS and ALIENS and ABSTRACTS 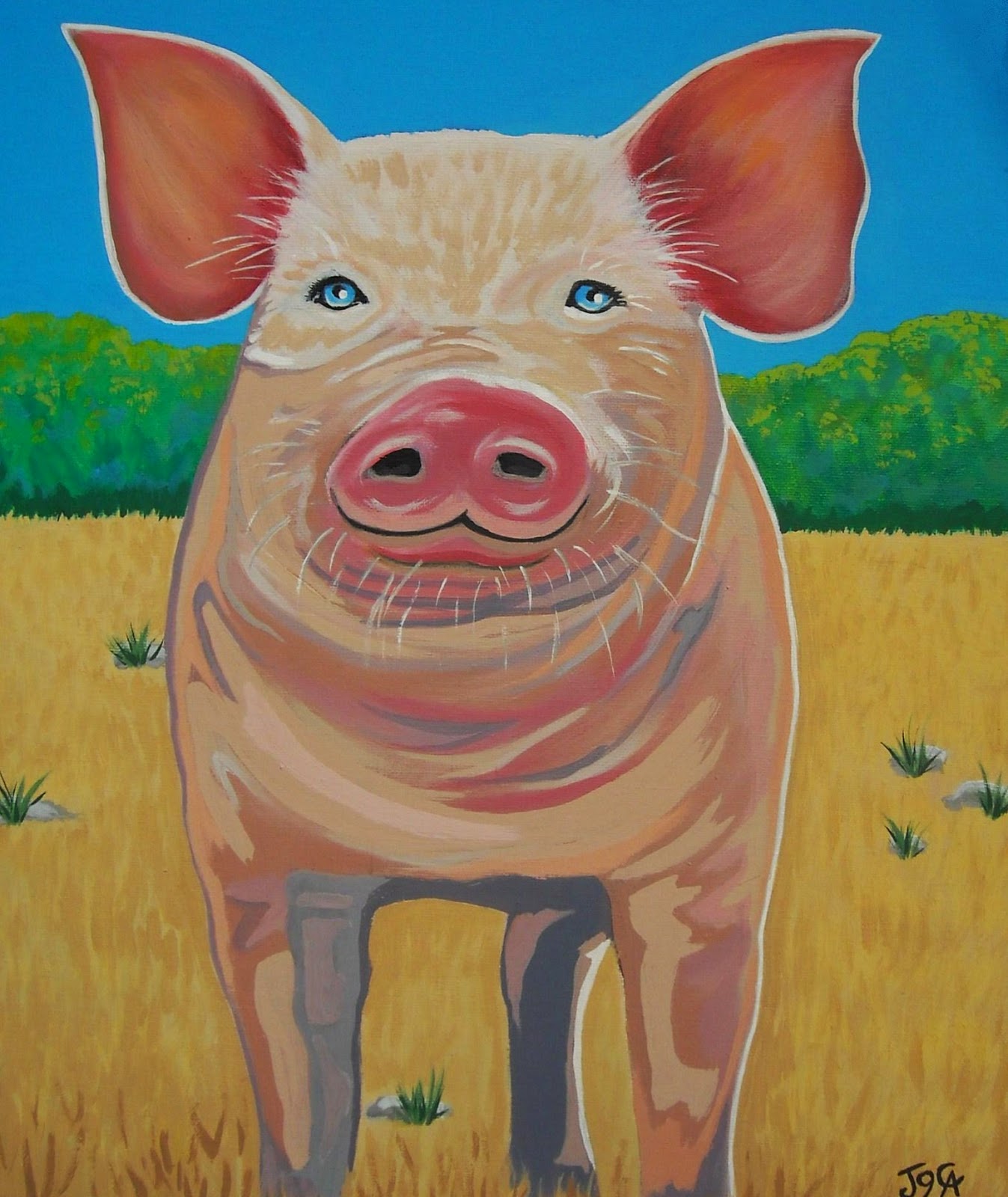 I LOVE ANIMALS and I love to paint them too.

Many thanks to Paul Davids for purchasing the painting above, which I call "Miss Pig"


Posted by Janine Cooper Ayres at 3:36 PM No comments: